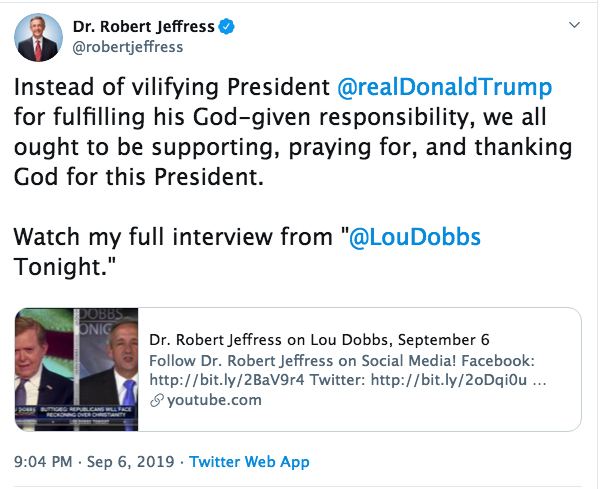 Sometimes crazy stuff flashes by and I wonder if it’s worthy of a response. I usually consider the source. Dr. Robert Jeffress is the Senior Pastor of First Baptist Church in Dallas, TX, so his words carry weight and deserve a response.

Dr. Jeffress’ statement sets up a false dichotomy that is extremely popular among evangelicals in reference to President Trump like no other president during my lifetime. The false dichotomy? If you’re a Christian, you must be supportive of the President. You’re either with us or against us, no other options.

Jeffress (and other evangelicals) say we should not vilify (speak ill of) or criticize our President for fulfilling his God-given responsibilities. The assumption here is that any elected official ought to be given respect, but the intent goes much further, implying that we should give a pass and unconditional support to the elected person. We should quit being so critical, contrary, disagreeable, and generally cantankerous.

I don’t think the President is “fulfilling his God-given responsibilities.” Since I’m trying to participate in a democracy, I’ll reserve the right to be critical of political leaders, regardless of what church leaders say.

Jeffress then makes the following statements:

Jeffress loses me with number 1 of his statement. I will not be unconditionally supportive of any elected official, even the President of the United States, if I disagree with his/her actions or positions.

I’ll agree to number 2 and pray for the President. I wrote a prayer for the current president after Franklin Graham’s appeal a few months ago.

The deep crap comes in the third part of Jeffress’ statement. I do not feel any sense of thankfulness to God, the creator of the Universe, for President Trump.

Evangelical leaders like Robert Jeffress and Franklin Graham are doing a good job of driving me from any association with my religious heritage and the beliefs that I’ve given deep consideration to for most of my life. They probably view my disillusionment with their messages as an indication of the weakness of my faith and that Southern Baptist Churches would be better off without the likes of me. Maybe they’re right.