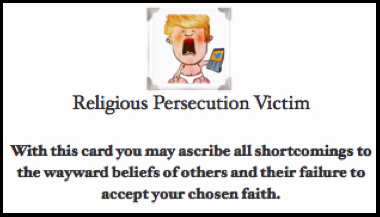 Despite the claim above, I don’t believe social media gives a damn about Donald Trump’s quote from a National Day of Prayer speech. This post is one of many that scream of “religious persecution complex” (an irrational obsessive belief that one’s religious beliefs are being trampled by non-believers or diverse thinkers).

It’s easier to blame failures on imagined persecution from the secular world than the fact that there’s little difference between the moral behavior in believers and non-believers. That the modern church has made itself impotent and irrelevant couldn’t possibly be the cause of its decline!

Play this card when you’re victimized by this evil and diverse society, when you hear “Happy Holidays” instead of “Merry Christmas,” or you imagine that schools have escorted God out the front door and eliminated prayer. This card is applicable to every conspiracy that might rise against you because of your religion!

“Let me never fall into the vulgar mistake of dreaming that I am persecuted whenever I am contradicted.”  ~Ralph Waldo Emerson

One thought on “Religious Persecution Card”