The current president makes a good case for the regular use of laxatives, or better yet, morning exercises, to encourage regular bowel movements and reduced time spent sitting on a toilet.

The following tweets were sent out by our country’s leader on the morning of December 7, probably in anticipation of sentencing recommendations for his former personal lawyer (“fixer”). More than an hour passed between the last two tweets, implying mental or physical constipation. I pasted the tweets below in red text, not to imply any divine inspiration.

Robert Mueller and Leakin’ Lyin’ James Comey are Best Friends, just one of many Mueller Conflicts of Interest. And bye the way, wasn’t the woman in charge of prosecuting Jerome Corsi (who I do not know) in charge of “legal” at the corrupt Clinton Foundation? A total Witch Hunt…

….Will Robert Mueller’s big time conflicts of interest be listed at the top of his Republicans only Report. Will Andrew Weissman’s horrible and vicious prosecutorial past be listed in the Report. He wrongly destroyed people’s lives, took down great companies, only to be……..

…..overturned, 9-0, in the United States Supreme Court. Doing same thing to people now. Will all of the substantial & many contributions made by the 17 Angry Democrats to the Campaign of Crooked Hillary be listed in top of Report. Will the people that worked for the Clinton….

….Foundation be listed at the top of the Report? Will the scathing document written about Lyin’ James Comey, by the man in charge of the case, Rod Rosenstein (who also signed the FISA Warrant), be a big part of the Report? Isn’t Rod therefore totally conflicted? Will all of….

…the lying and leaking by the people doing the Report, & also Bruce Ohr (and his lovely wife Molly), Comey, Brennan, Clapper, & all of the many fired people of the FBI, be listed in the Report? Will the corruption within the DNC & Clinton Campaign be exposed?..And so much more!

There would be more tweets to follow, inconsequential rantings from a man sitting alone on his toilet, occupying a position beyond his capabilities, and desperately trying to divert public attention from an investigation (or as he would say, a “total Witch Hunt…“).

Our leaders are always flawed, but human. Sometimes they’ve even been able to laugh at themselves and their flaws. I began my day, feeling only sadness for this caricature of a man who has spent his life working to limit qualities that would have made him more human and prepared to lead. 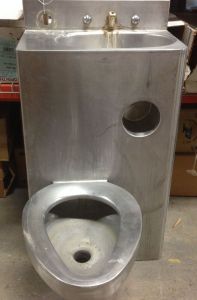 Update as of December 15: From what is being reported in the news, it appears that this toilet might have been a better image for this post.